New Formatting Options in Google Docs with Images and Drawings

Some very exciting news in Google Docs!!  This is the update that many of us have been waiting for.   There are now additional formatting options available when working with images and drawings in Google Docs.
You now have the option of formatting images and drawings to go behind or in front of text.  Previously the only options were "In Line", "Wrap Text" or "Break Text".  You will see these new options on the formatting menu when you click on an image or drawing. 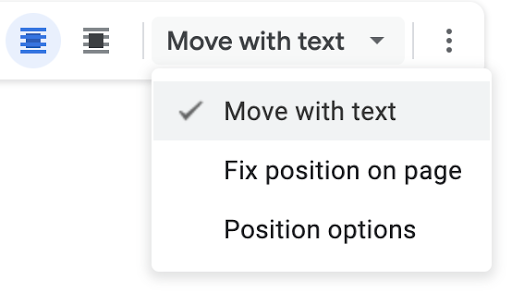 Text formatting features that are available are bold,  italic, underline and

Pressing this button will remove the formatting of the text that you highlight.

Every month, our IT team at WECDSB will be producing a Brightspace newsletter.  In this newsletter, you will find announcements for new ministry courses and highlights for some of the newer Brightspace features that you may not have used yet.

The April newsletter has been published.  You can view it here: April 2021 Brightspace Newsletter

Google Meet: End Call for All

How does this work?

When the host (the teacher) of the Meet clicks on the red phone to end the Google Meet, they will be prompted with two choices, to “Just leave the call” or to “End the call”:

What does this mean for me as a classroom teacher?

-The Meet link can now always remain in your Google Classroom banner. It is no longer necessary to make the meet link invisible.

-When you are absent, the occasional teacher can now use the Meet link in your Google Classroom baner, rather than creating their own Meet link and pasting the link into the stream. If you will be absent please ensure that the Google Classroom link now remains visible.

Every month, our IT team at WECDSB will be producing a Brightspace newsletter.  In this newsletter, you will find announcements for new ministry courses and highlights for some of the newer Brightspace features that you may not have used yet.

The March newsletter has been published.  You can view it here: March 2021 Brightspace Newsletter

Google has announced some exciting new features coming to Google Meet.  Some are set to roll out in the next few months and some will roll out before the end of the year.

New features coming in the next few months

1.  End Meeting for Everyone

This new feature will be rolling out over the next 15 days.  The "End Meeting" button can be used by the host to end the meeting for all the participants. Once the end meeting button is pressed, all the participants will be removed from the Meet and will not be able to re-join.

Google Meet has already released the mute all button.  Hosts can now mute all the participants in the Meet by clicking on this button.  Coming in the next few months, hosts will also be able to control when participants can un-mute themselves.

3.  Set up Breakout Rooms ahead of time

Teachers will be able to set up break-out rooms before the Meet starts.  This will be done through the Google Calendar.

Any Google Meet that is not created through Classroom will have the ability to have multiple hosts.  This will make it easier to facilitate classes.

A new feature that is slated for later this year will be for Google Meets that are generated through Google Classroom.  For these Meets:

Teachers will be able to receive transcripts of their Google Meets.  These transcripts can be shared with students to review what was discussed in class or to maintain a record for future reference.
By Vittoria Fortier at February 22, 2021 No comments:

Teachers and students will be able to customize their text in their Classroom posts.  Bold, italics, underline and bullets will soon be available.

Educators will be able to see statistics on how their students interact with Google Classroom including which students submitted assignments, or commented on a post on a given day.

Students will be able to start their work offline, review assignments, and write in Google Docs without an internet connection.

5. Improved pictures of homework for students

Students will be able to combine photos into a single document, rather than submitting individual files.  They will also be able to crop and rotate images and adjust the lighting on the images.

New Formatting Options in Google Docs with Images and Drawings

Some very exciting news in Google Docs!!  This is the update that many of us have been waiting for.   There are n...

Visits in the last 7 Days

Where in the World?

Don't Fight Tech, Use the Right Tech! by Douglas Sadler is licensed under a Creative Commons Attribution-NonCommercial-ShareAlike 2.5 Canada License.
Based on a work at wecdsbit.blogspot.com.